Regardless of where a cidery in BC sits on the production spectrum, their product is lumped in with the Refreshment (RTD) category. All cider products—foreign or domestic, mass-produced cider-flavoured cocktails or locally produced, truly 100% BC products— are classified this way. They’re all lumped in with alcoholic sodas, Caesar cocktails, and wine spritzers.

The current BC regulations classify small, urban, and commercial producers into the large production, commercial category while not truly defining “craft cider”. This effectively places small producers vs. small producer bent on the policy and offers a benefit to non-craft producers to water down, mix up, and create a cheaper version of cider that doesn’t jive with the true craft ethos of this category. Conversations that I’ve had with cider producers in other provinces, New Brunswick for instance, promote a tiered approach to taxation much like we now have in the craft beer category. Percentage mark-ups encourage cost cutting and unfair competition while a tiered approach allows a more rational and easy transition to a new paradigm. Leave the land-based, craft producers alone. Create a new and defined category for commercial-craft cider, and institute a production-based mark-up that eases the commercial—and likely more urban—producers into the category. 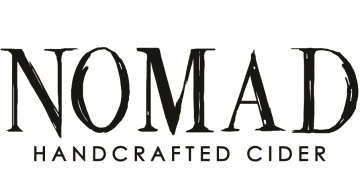 Nomad Cider in Summerland, B.C., Is a land-based cidery; the two business partners, Mike Petkau and Brad Klammer, are orchardists as well as cider makers. They tend their own trees and nurture an estate orchard that will produce a substantial portion of their raw ingredients in years to come. They’re also allowed to procure apples from local farmers, up to 80% of total production.

Mike and Brad started making cider back in 2012 and founded Nomad in 2015. Both have travelled extensively to cider producing regions in Europe and North America. They take much of their inspiration from the old-world low-intervention techniques that have created exceptional ciders from those regions for centuries. They’ve played with (and nailed) the Spanish Sidra style and nailed the French keeving technique the past two vintages – no small feat. They also have been building up an extensive wine and spirit barrel ageing program since 2016. Look for Nomad White Barrel (one of my favourites) and their Nomad Traditional Dry at your favourite private liquor store. Their special releases are amazing finds as well.

Northyards Cider in Squamish, BC is a commercial cidery. They don’t own their own orchards, instead nurturing relationships with farmers and purchasing all of their juice and apples from third parties. Same thing as the farming cideries do, except they don’t have an orchard. Northyards have chosen to locate in an urban environment, built a tasting room and production facility just down the road from Backcountry Brewing and A-Frame Brewing in Squamish.

Life and business partners Alison Pound and Kathleen van der Ree were introduced to cider in 2010, on a trip to the Bellingham Beer Festival. From there it’s been a whirlwind of learning, life experiences, and more learning. A lawyer by profession, Kathleen provides a lot of the backbone to the tasting room and the legal aspects of the cidery while Alison has devoted herself to her relationships with her farmer growers and becoming the best cider maker she can be. Like most of the cider folk in the province today, Alison deemed the cider and perry production course a must-do and she was fortunate enough to join Andrew Byers of Finnriver Cider in Washington for an extended internship. (If you haven’t tried his cider, you must.) Today, Northyards’ tasting room is open seven days a week and offer a terrific lineup of food and ciders. Be sure to try their Semi-Dry and their Grapefruit Hop when you visit.

What’s Brewing: What is your cider philosophy?
Alison Pound: Traditional methods + delicious juice + balanced well = magic.
Mike Petkau: We make our ciders as naturally as possible. We’re a low-intervention cidery. We use wild/native yeast, no nutrients, extremely low amounts of sulfites, and we stabilize with filtration rather than pasteurization.

WB: Who is your favourite cidermaker, aside from yourself?
AP: Andrew Byers from Finnriver.
MP: Eric Bordelet. He’s a French cidermaker with seriously awesome ciders.

WB: Best cider you’ve made?
AP: Three so far: Semi Dry, Grapefruit Hop and BlackBerry
MP: Our Keeved. It’s very difficult and expensive to do a natural keeve, well worth the result.

WB: An experiment that didn’t work out well? Everyone’s had ’em…
AP: I tried making Ciderkin (a light, low alcohol cider) this year and initially it was killer delicious but it basically it turned to vinegar. I was too busy with opening the cidery this past year and wasn’t focused enough on it.
MP: The very first cider we made in 2012 was not very good. We ended up mixing it with 7UP because we didn’t want to waste it!

WB: What should the Province of BC do to grow our industry?
AP: Give us a reasonable tax. 73% is unfair.
MP: Subsidies like what they are doing in other provinces. Cider made with local fresh pressed fruit is a booming agricultural-based market that’s good for BC.

WB: What is a sign, five years from now, that will let you know cider has made it?
AP: Craft cider on every tap at bars.
MP: More proper cider being served in restaurants and sold in stores. They can buy ciders made from concentrates or they can buy cider made with 100% real fresh pressed fruit. The flavour difference is massive.

WB: An upcoming cider release we can get excited about?
AP: Squamish Heirloom. Jonagold. Both are going to be stellar.
MP: We always have new and fun things in the works, you’ll just have to wait and see!

Previous Post (p) What’s NOT Brewing: Putting a Name To Craft Cider | All About Ciders

Next Post (n) Harvesting The Urban Orchards | BC Orchards

You can toggle right click protection within Theme Options and customize this message as well.

You can also add shortcodes here.